When it comes to family dinners or Sunday lunches, a roasted hunk of meat has got to be the main feature. Depending on what slab of animal you opt for it will stand up to feeding a hungry crowd. That said, the main reason I opt for the classic roasted joint is because its the easy option. Most of it can be prepared in advance and I don’t need to worry about dishing it up to make it look pretty. By firing everything into a few serving platters & leaving it on the table for everyone to help themselves, I can instantly create a feast which looks like a heck of a lot more effort than is actually involved.

With Spring upon us (note: I am using the fact that daffodils are now in full bloom rather than the weather as an indicator here) a roast  leg of lamb is probably the go-to meat of choice for most dinner tables (see here for recipe). As easy as this hunk of meat is to prepare and cook, I offer up something a little more elegant but easier and faster to cook: The Crown Roast.

This handsome fella may sound fancy but in fact it’s all an act. Add him to your Easter lunch this year with the traditional trimmings and you wont be disappointed (or have spent the morning stuck in the kitchen).

Lamb crown roast is essentially 2 racks of lamb tied together to form a crown. You could of course try this yourself but why bother when the butcher can do it for you in 10 mins? Granted you don’t get as much meat from the crown compared to a leg of lamb but this makes it ideal when you are cooking for fewer people. Plus, the meat is much juicier and far easier to carve compared to the leg. You could buy 2 joints of meat if feeding a crowd but if this is too expensive then bulk it out with stuffing and extra trimmings. After all, if the gravy and potatoes are top notch, no one will really mind.

I served this with roast potatoes, pork & rosemary stuffing, gravy and steamed baby carrots and asparagus. This would feed 4 comfortably although may not give you any leftovers. We of course ate it ourselves and the leftovers. 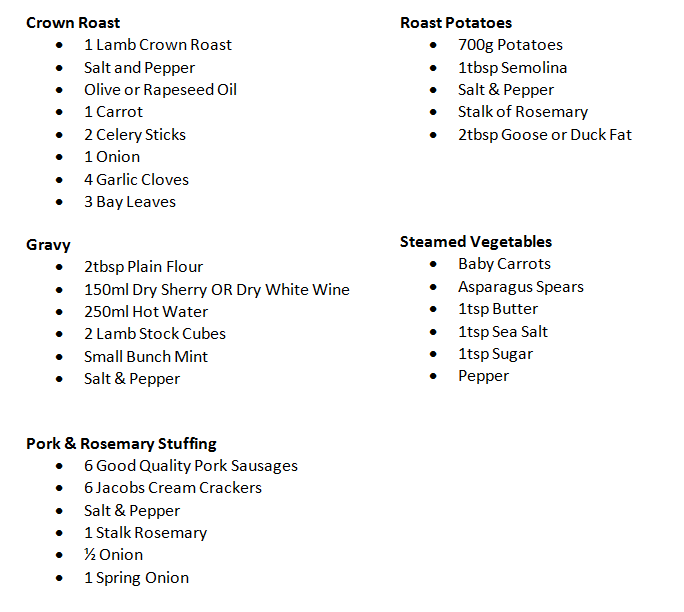 Heat the oven to 180C. Roughly chop the vegetables (I don’t bother peeling) and toss them into a roasting tin with the garlic and bay leaves. Drizzle a little oil over the top. This is now a flavour base for your gravy.

Lay the crown roast on top of the vegetables & smear oil all over the meat then lightly season with salt & pepper. Cover the tops of the bones with a little tin foil to stop them burning and set aside.

Finely chop the onions and fry over a medium heat with a little oil for 15 mins until soft and translucent.

Meanwhile bash the crackers until you have a fine rubble (you can use a food processor, pestle & mortar or your fists and a plastic bag). Remove the sausages from their casings and add to a mixing bowl with the ground crackers & chopped rosemary. Season lightly with salt & pepper.

When the onions have cooked add to the sausages and leave to cool for a few minutes. Squelch the mixture together using your hands, then press it into a small oven-proof dish & cover with tin foil.

Place the crown roast & stuffing in the oven on the middle shelf. Cook for 45 mins (for rare lamb) to 1 hour (for medium lamb).

Spoon the goose or duck fat into another roasting tin and place it on the bottom shelf of the oven (under the lamb) to heat.

Peel the potatoes and cut them into large chunks. Add to a pot of cold water and bring to the boil. Once the water is bubbling set the timer for 5 mins. After which drain the potatoes and toss them back into the pot with the semolina, stalk of rosemary and plenty of salt and pepper. Put the lid on the pot & shake vigorously to fluff them up. The fluffier the potato & the hotter the fat, the crispier the potato becomes.

Tip the potatoes into the hot pan of oil and turn with a pair of tongs to ensure each potato is coated in the oil. Cook on the bottom shelf for 45 mins.

Roughly chop some parsley and set aside. You wont need it until serving but it saves time later if you do it now.

Toss the baby carrots into the steamer pot with the butter, sugar and salt. Remove & discard the bottom 2cm of the asparagus spears, which is often very woody, and add the spears to the top part of the steamer. Set aside until ready to use. You can of course use any other vegetable or indeed boil the vegetables, but asparagus can overcook easily if its boiled.

Back to the Crown Roast…

When the lamb has had its cooking time, remove from the oven & transfer to a plate. Tent the meat in foil & cover with a clean dish towel to keep warm until ready to carve. It needs to rest for at least 15 mins. Keep the stuffing wrapped in foil until ready to serve.

Transfer the potatoes to the top shelf of the oven now.

While the potatoes are cooking & meat is resting, scrape all the vegetables, juice & fat from the  roasting tin into a pot. Cook this over a medium heat until it starts to sizzle. Add the flour and mix well until it forms a thick paste. This is your roux which will thicken the gravy.

Add the sherry or white wine to the roux and stir continuously until its incorporated and there are no lumps. Slowly add the hot stock a little at a time, stirring continuously, until all added. Don’t be tempted to add it all at once otherwise the gravy wont achieve the desired consistency.

Add the mint and cook  over a low-medium heat until ready to serve. Taste for seasoning and add a generous pinch of salt & pepper if it needs it.

Back to the vegetables…

Check on the potatoes and give them a shoogle (Weegie for shake) to stop them sticking to the pan. Add some boiling water from the kettle to the carrots & cook for 15 mins over a medium heat.

2 mins before the carrots are ready, add the steamer compartment with the asparagus and clamp the lid on. Once the vegetables are cooked, drain them, put them back into the pot with the lid on to keep warm but keep the pot off the heat. Season lightly with pepper.

Cut the string off the crown roast and slice the meat into thick chops. Arrange on a large platter & spoon the resting juices over the meat to keep it juicy.

Remove the potatoes from the oven when they are golden & crispy. Toss the chopped parlsey into the tin & give it a vigorous shake to coat. Tip them into a large serving platter.

Strain the gravy through a sieve into a jug & decant into a gravy boat.

Tip the vegetables into a serving plate.

Bring everything to the table (don’t forget the stuffing!) and tuck in. Hopefully by this point someone else will have set the table & poured you a cold glass of wine.

When I lay it out all like that, I admit it does sound a little masochistic, but I swear the trick to getting it all on the table while its still hot is in the timings. Even though I don’t necessarily need a recipe to cook this I still like to sit down for 5 minutes beforehand and just work out how long everything will take. If I work backwards from dinner time (say 7pm) and have little deadlines like, potatoes have to go in the oven at 6.10pm, it helps to keep me on track.

There is nothing to stop you from copying & pasting these instructions into a word document with the timings, printing it off and sticking it somewhere easy to read in the kitchen if you have to. I promise after a few runs at this, you wont need it again because it will become second nature.

It’s like I always say with a cake. If you get really good at 1 cake and decorate differently each time, everyone will remember you for your great bakes, even though its really the same one each time. The same applies with a roast dinner. Everyone should have a staple meal they can produce in their sleep (mine is actually Roast Chicken, see here for recipe). If a Crown Roast is yours, then you will never be stuck for any occasion.