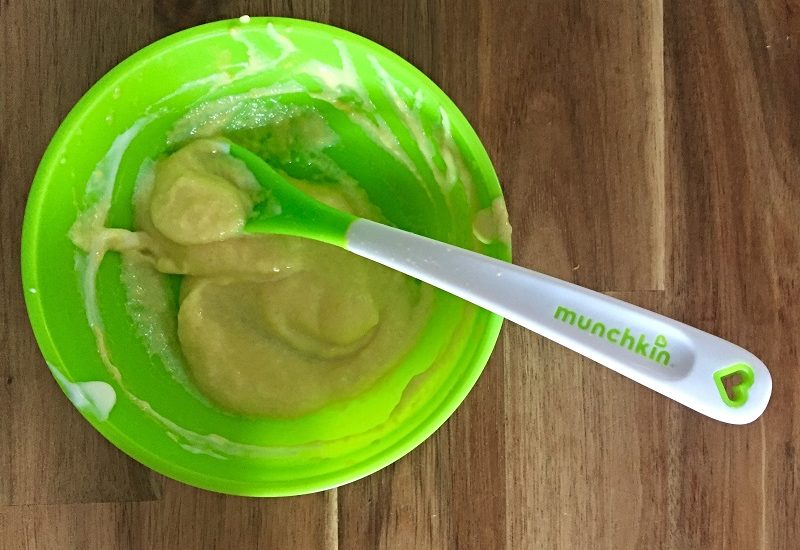 Weaning is one of those milestones I looked forward to the most and one, which when it arrived, I felt strong cba vibes. I had JUST gotten James into a good eat/sleep routine and I was scared to introduce anything new which could potentially mess it up. And then there was the whole debacle of which weaning approach to take. Do I go down the purist Baby Led Weaning (BLW) road or do I opt for traditional weaning? Am I being a bad mum or will I be stunting his development if I do traditional weaning? I mean, the way some of the evangelical BLW’ers go on you’d think babies not fed by BLW will never eat solid food. Then again, do I really have the energy and the time to do puree after puree?

I won’t bore you with how these concerns played about in my head, or for how long, but it was long enough to bore me. And R, and probably my pals and family. In the end this blog post on Selifish Mother which urges us to repeat: “I have never met an adult who does not eat solid food” that made me shut up, go with my gut, and just get on with it. (the whole process also made me realise just how much time I spend worrying over my parenting choices, whereas R just gets on with it. note: this is a criticism of me rather than of him, but that’s for another day).

Yeah I know traditional weaning is not as trendy as BLW, in that its not got a plethora of dedicated Instagram accounts featuring bamboo plates of food, but it’s what I opted for. Or at least I planned to start with traditional weaning and I’d see where I’d end up. Now I won’t try to justify why I chose this approach cause I don’t want it to come across that I’m ashamed of my choice. Nor do I want to criticise BLW.  Simply put, traditional weaning (or at least the way I done it) worked for me and our family life.

So now what? I picked an approach, I bought a bunch of baby spoons and an ice cube tray, and the stick blender was dug out from the kitchen drawer….now what do I do? Sure, looking back on it now it should have been easy easy as boiling up some carrots and spoon feeding him, like scores of parents have done before me, but the neurotic in me (and christ I never fully appreciated that side of me till I became a parent *eye roll*) needed a PLAN. I needed a solid step by step guide to coach me through.

Had I known how much I’d come to depend on Ella’s Kitchen I’d have bought shares in the company. It was Poppy Dinsey’s Twins Vs Food Insta account which sold me on Ella’s Purple Cookbook and it’s easy guide to those early weeks of weaning. They suggest starting traditional weaning with their First Tastes plan. Where for 2 weeks you introduce a single, different, pureed vegetable every day. The idea is that you build up the baby’s taste to the bitter savoury veggies before introducing them to fruit/sweet veg. Following this, you can do combinations of veg and fruit, and once past the 6 months stage you can introduce dairy/pulses/pasta. Then at 7 months, fish and meat are on the menu.

Now asides from effectively holding my hand through the early weeks of weaning, what I liked about this approach was that I could start James a little earlier on food since he was already showing a lot of interest. But I didn’t follow it to the letter, I used it as a rough guide and even incorporated some finger foods early on to make a weaning approach which worked for us.

At 21 weeks and while at a BBQ with friends, James whacked his hands onto my plate and got his first taste of food: rib juice and he absolutely loved it. Clearly my son through and through. At 22 weeks I tried him on a little pureed carrot but he wasn’t having any of it. Maybe compared to meat juice carrots were just a big disappointment (fair play kiddo). However, chilled, chopped baby tomatoes in the Nuby Nibbler not only soothed his aching gums but introduced him to a slightly more appropriate first taste of food which again, he loved. It wasn’t until he was 24 weeks when weaning officially began after I offered and he accepted with gusto.

I introduced 10 different single veggie purees (broccoli, cauliflower, carrot, potato, aubergine, courgette, peas, sweetcorn, sweet potato, parsnips) over 2 weeks but rather than 1 different vegetable each day as suggested by Ella’s Kitchen, I offered the more bitter flavours every 2 days to get him used to the taste.

Now the cooking was pretty easy: I steamed the veg and blitzed it up in the blender with a little of the cooking liquid; decanted it into a silicone ice cube tray and froze. Once frozen, I stashed the cubes of veg in a freezer bag. And continued this with the 10 different vegetables. And to be honest, it wasn’t much effort to batch cook. Cooking a head of broccoli or a tin of sweetcorn produces about 16 ice cubes. Times that by 10 veg, and you begin to get an idea of what my freezer looks like.

Some of the purees were very thin and some were a little more nubbly, there is the option of pushing them all through a sieve but I thought this was a step too far. Either way, James accepted all of the textures fine. But its worth noting that it does take him longer to eat the thicker purees compared to smooth ones. I expected a lot of resistance with weaning but (touch wood) its been plain sailing. He’s definitely got his favourites (sweet potato, banana) and once we brought fruit into the mix he was living his best life, but even when we go back to the spinach and broccoli, he’s still happy.

The best advice I read was to introduce 1 “meal” a day at a time which best suits your routine. However I also read that it was best to introduce them to food when they *weren’t* hungry. And this didn’t work for us. If I offered James food after his milk feed he showed no interest. So I swapped it about, offered the food first and milk next. Granted, I had to offer him food a little earlier than his bottle cause if he was starving he’d throw a fit. As I’m doing 3 hourly feeds (9am, 12pm, 3pm etc), I simply offered him food half an hour before the bottle. This way James takes what he needs/wants from the food and tops up with the bottle.

I started with 1 cube of veg and gradually built it up using James’ hunger cues as a guide that he wanted more. I found that if he finished the food quickly and still looked for more, he was probably ready for a bigger portion.

Once we’d been on 1 meal a day (which I’d pushed slowly forward to midday) for a couple weeks and he started to show hunger signs only an hour after his 3pm bottle I then introduced a 2nd meal at 3pm again followed by his bottle. He’s still taking the same amount of milk as before so we’re not at the stage where we’re ready to drop a milk feed yet, but I imagine that will come once he’s feeling fuller from increased carbs, protein and fat in his diet rather than just veg and fruit.

Currently at 27 weeks he gets 3-4 cubes at midday and 2-3 cubes at 3pm and he’s STILL showing signs of hunger.

One of the reasons I opted for traditional weaning was that I wasn’t comfortable with the gag reflex that babies at this age experience when eating solids. Now I read the books, the blogs, I got advice from other BLW’ers but when push came to shove, I couldn’t do it. I feed James mostly on my own and I don’t have anyone in my life whose done BLW to sit with me and reassure me. That said,  I wasn’t completely adverse to offering James finger foods. So far these have included:

Most of these came from James’ lead. He’d either grab at my plate or look interested in what I was eating. There was a couple scary gagging moments, once where I was convinced he was choking and needed to be whipped out of the high chair fast, and while it didn’t put me off giving him fingers foods again it did confirm that I was doing it the right way for us.

While there is a lot of wonderful blogs and advice out there for a plethora of weaning approaches, it’s worthwhile remembering that weaning isn’t as simple as the offering and eating of food. There are certain foods which depending on the age of the child are not appropriate. As always, if in doubt then speak to your Health Visitor. The best advice I can give is: