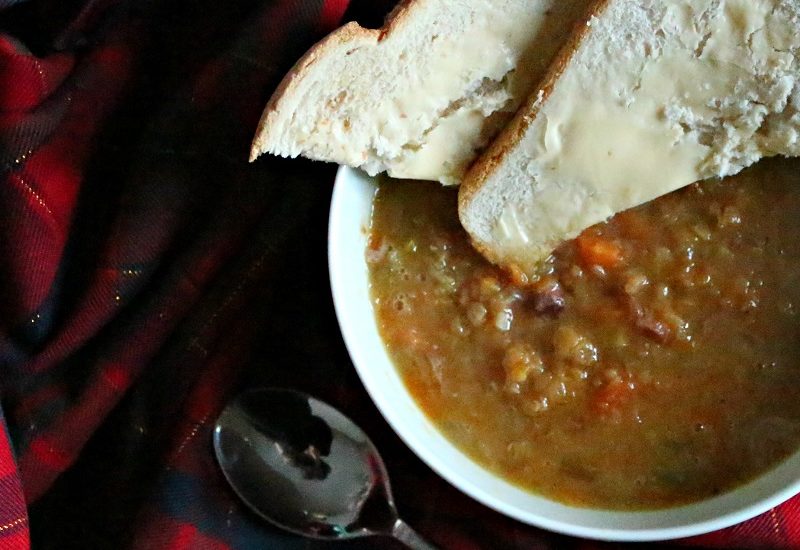 Everyone I know, well the Scottish folks at least, have grown up with some version of this soup. To the untrained eye it is just a Ham and Lentil soup however to us Scots its referred to simply as ‘’. I have never been to a Scottish persons house or a Scottish cafe or restaurant, been offered a bowl of homemade soup, and not received ham & lentil soup or something which resembles what I grew up with. It doesn’t even matter if the soup hasn’t been homemade, nor does it matter that there are indeed other soups you can make at home, is its name and forever shall it be so.

I’ve never had a recipe for this soup (has anyone?) I think what we all do is simply create it from memory thus we all have our own versions and our own ways of making it. But what is peculiar (yet endearing) is that your Mum’s soup, despite being what we base our own versions on, will invariably taste better. And your Granny’s soup, well, that’s a pedestal we all aim for. Now my homemade soup may not taste exactly as my Mum’s does, but this is my interpretation just as my Mum’s and my Aunt’s is an interpretation of my Gran’s. No doubt our child will have their own version and my Mum’s will get bumped up to the top spot.

Like most Scottish children, I ate homemade soup a lot growing up. Nothing fancy went into it and this is not the kinda soup I’d want faffed around with Instead it’s old fashioned, hearty, stick-to-your-ribs, home comfort kinda food. And the kind of food we need in Scotland at this time of year.

As with all soup recipes, I hesitate to give a precise quantities of ingredients because the amounts we use will vary depending on how many people we’re feeding, whether we’re batch cooking, affordability etc. With this in mind know what my quantities listed below will produce is a massive pot of soup which I also freeze in small portions. If you want to make less or more, then do.

Make it Veggie/Vegan: Don’t add the ham ribs and opt for a suitable vegetable stock instead.

Slice the leeks, celery, and a couple carrots and dice the onions. Add these to a large soup pot with a little olive oil. Cook over a low-medium heat with the lid on for 15-20 mins to soften but stir regularly.

Meanwhile, grate the remaining carrots and turnip, and boil the kettle for the stock (if using stock cubes).

Once the vegetables have softened add the remaining ingredients (but don’t add salt at this point: the ham is very salty so its best to taste and adjust the seasoning at the end) and bring to a rapid simmer. Once bubbling, reduce to a low heat and cook with the lid on for at least 2 hours until the lentils are tender. If after an hour the soup is not as thick as you’d like then add more lentils and give it another 30-40 minutes to cook.

Ladle into a bowl or mug and serve with a wodge of buttered bread. Just remember this will taste miles better the next day, and of course when you become a Granny. 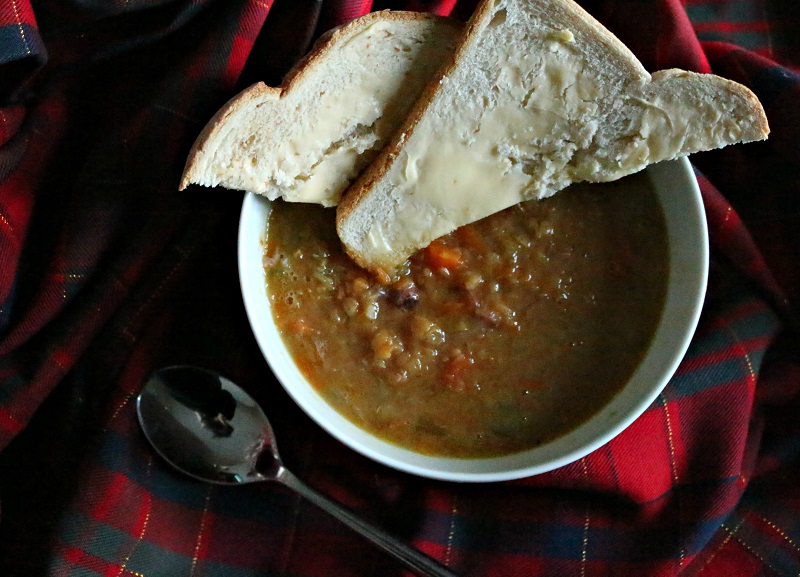